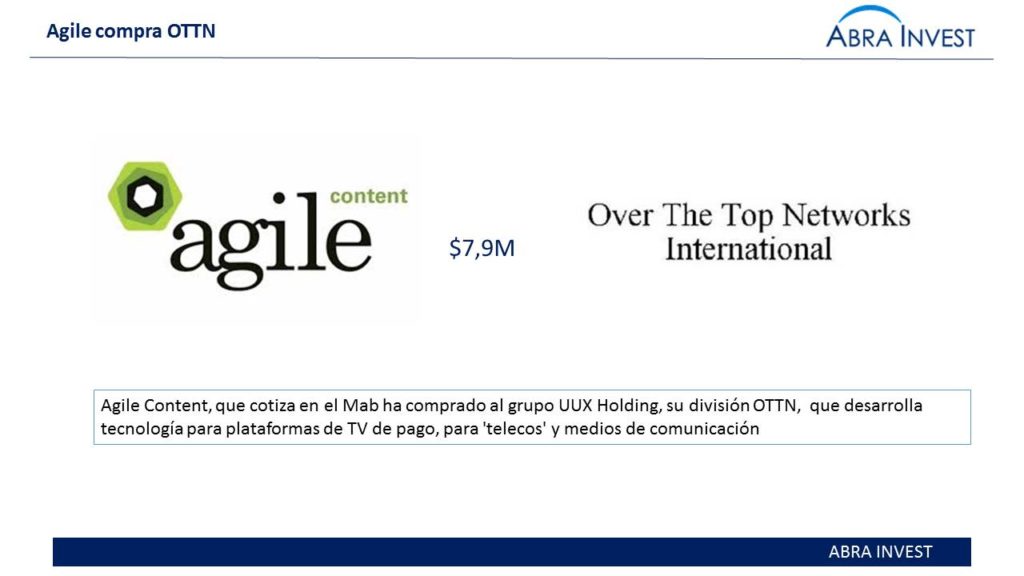 MAB as a strategy for inorganic growth

As we already told you in a post The Mab listing a few weeks ago gives companies the necessary liquidity to be able to grow inorganically (acquisitions).

Agile believes that the growth of on-demand video consumption and personalised TV is changing the context of advertising and the way we watch TV, which is why it wanted to invest in the sector and did so by acquiring an experienced company with clients like TelefónicaDirecTV, Sky o NET.

According to Hernán Scapusio, CEO of Agile Content, "This operation is another step forward in Agile Content's growth strategy, advancing in the consolidation of our project. It allows us to accelerate our innovation, becoming a relevant player in video solutions for telecommunications and media companies, at a time when TV is being redefined".

The purchase of OTT allows synergies between the two companies to be exploited.

Agile wants to be a leader in the video content sector. At the moment, it is the only Spanish company on Gartner's list of the 18 best video content management companies. It is also the best positioned company on the "vision" axis among the "niche players", which indicates the future prospects of the companies.

The acquisition of OTTN is a strategic transaction for Agile. The technological combination of Agile Content and OTTN will allow it to offer TV advertising optimisation and targeting solutions that are already successful on the internet. Consolidating its position in the markets where OTTN was already operating (Brazil, USA and Spain), as well as optimising Agile's cost structure.

The transaction is valued at $$7.9M plus a variable tranche subject to OTTN's compliance with certain financial variables for 2016. The price payment contemplates a cash payment mix (USD 5 million, in two maturities; one at the initial moment and a second one after 12 months) and a portion of capital increase by offsetting credits through the issue of new Agile Content shares.

The Salinas group, the former owner of OTTN, as well as the two main executives of OTTN, will become key shareholders of AGILE, assuming commitments of permanence as a sign of their commitment to the resulting company, and will also participate in the Board of Directors with the appointment of a Director, once the operation has been formalised.

If you are thinking of going public on the MAB, contact us. Abra-Invest has an expert team that will advise you to make the process a success. Call us at + 34 946424142 or fill in the contact form.

Clerhp structures exits the mab up 10.24%

TECNOQUARK goes public on the MAB to finance growth

Oryzon genomics floats on the MAB