Intel, the US integrated circuit manufacturer, has been very active in the world of corporate finance in the last year, making several acquisitions.

We look at the latest of these, the purchase of Smart Edge for $27M.

GETTING TO KNOW INTEL

Intelfounded in 1968 by Gordon E. Moore and Robert Noyce, initially focused on the manufacture of memories.

But only three years later, manufactured the first commercially available single-chip microprocessor in the history of computing..

It was commissioned by a Japanese company planning to launch a new calculator on the market.

Seeing its success and its ability to perform 60,000 operations per second, he moved into the field of microprocessors.

Shortly afterwards, an upgraded version with double the capacity, more memory and speed was released.

This microprocessor, called Intel 8008, started to be incorporated into devices in petrol stations, airports, slot machines...

This would be the beginning of Intel's strong leadership position in the industry today, which it has been able to maintain over the years.

As a partner in IBM's production of the first PC and in the design of the USB port, Intel's influence on the computer industry is unquestionable.

Adapting to recent changes and trends in the digital sector, its business lines are currently as follows:

Thus, the company's business model is based on becoming the leading supplier to the internet world, moving away from its almost exclusive focus on components.

In order to achieve this, part of its strategy has been based on acquisitions in the sector.

He already has more than 7 operations under his belt since July 2018.

THE ACQUISITION OF SMART EDGE

Recently, it was announced that Intel had agreed to acquire the platform for edge computing Smart Edgefor an amount in the region of $27M.

This demonstrates Intel's commitment to leading the technology sector in all its branches.

With this particular case, it increases the company's ability to address the 5G network transformation, with a leading position in the edge computing.

Smart Edge is defined as a secure, scalable and scalable platform for cloud native for multi-access perimeter computing.

Enterprises and communications service providers can thus enable and deliver cloud services closer to their customers.

In short, Intel is seizing this opportunity to expand its business model beyond its two main business lines, Client Computing Group y Data Center Group. Also to enter the world of 5G networks.

Due to Intel's big bet to lead the technology sector, and the numerous acquisitions it has made over the past year, we analyse and we value The economic and financial situation of the EU is set out below.

Intel's sales show good growth in recent years, mainly due to the increase in sales of its business line. Data Center Group.

However, it reflects major concerns about their increase in the coming years.

Margins also continue to be at a good level and may increase in the coming years, due to Intel's heavy investment in the development of nanometre technology.

This keeps the company's gross margin at around 57-60%.

In terms of the balance sheet, the items are growing in line with the growth in sales, with no single account standing out.

This demonstrates a strong and solid asset position of the company.

Intel's multiples, in particular the P/E ratio, is one of the lowest in the sector and its peers.

At 6-year lows, these multiples reflect the scepticism with which investors view the prospects for sales over the next few years.

Intel needs to be able to demonstrate good implementation and execution of the products and business lines it is designing and planning to pursue, as well as to reduce costs in order to regain investor confidence and obtain better valuations. 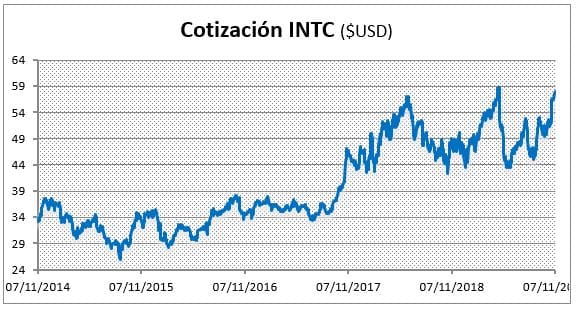 Intel's share price has shown strong growth since 2014, but significant swings over the last year.

The price appreciation so far this year seems to indicate that the market is beginning to look favourably on the company's future and forecasts.

This is thanks to its strong results, which exceeded analysts' expectations by a wide margin.

If Intel is able to continue this good trend and continues to grow beyond the poor analyst forecasts, it should be able to experience a strong revaluation to the multiples of its peers.