Prosegur has gone on a shopping spree in 2016 and so far this year has made 3 purchase of companiesto strengthen its cybersecurity division, a market it entered in 2014, to enter South Africa, a new market where it was not active, and to strengthen the market for valuable commodities. 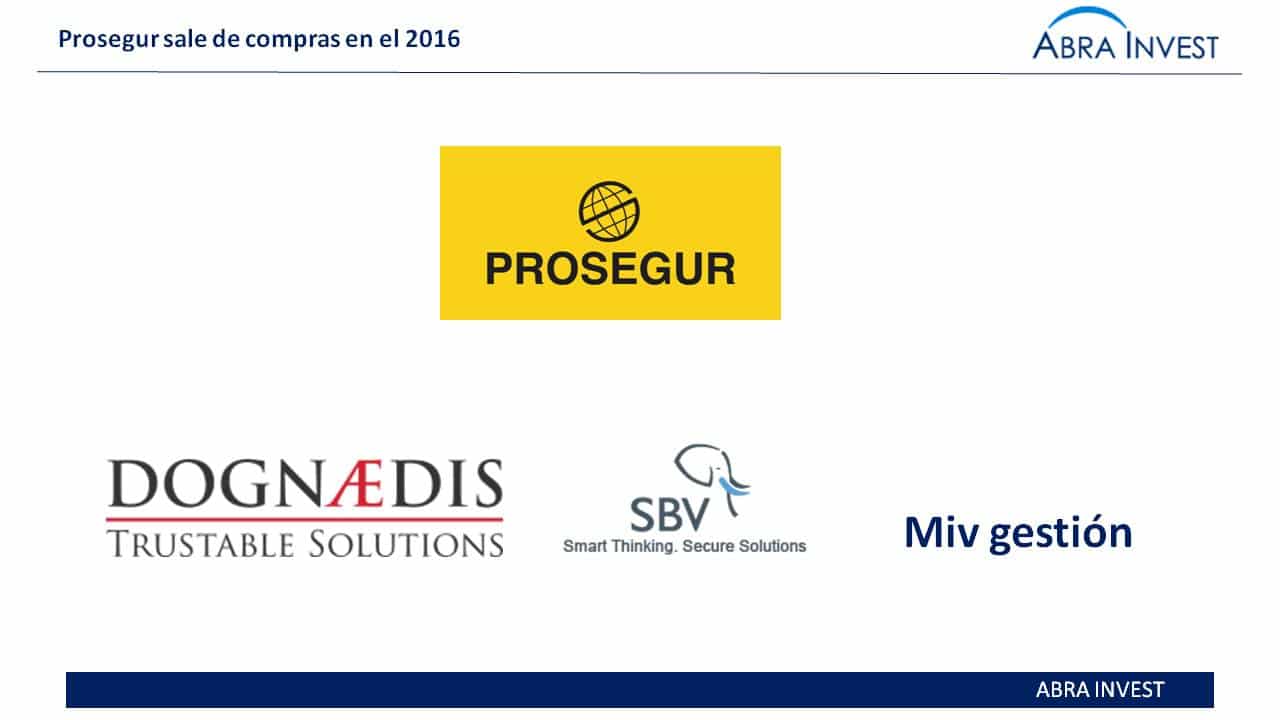 Prosegur buys Dognaedis in the field of cybersecurity

Prosegur bought in mid-March  Dognaedis in Portugal, to strengthen its cybersecurity division, which it created in 2014 and which has been growing rapidly to date. In 2016, it plans to double its workforce.

Dognaedis is a Portuguese company, which offers managed information security and data protection services, with clients primarily in the financial and telecommunications sectors, and also offers cybersecurity services for governments and defence departments.

The Portuguese company also carries out information security audits, audits of software developments and has a cybersecurity incident response team. The company is based in Coimbra and has a subsidiary in the UK.

Prosegur has realised that times have changed and if it wants to be the king of security, it has to adapt to the new market. It is no longer enough for its customers to have physical security, as many attacks nowadays come through the network, which is why in recent years they have made a great effort in the cybersecurity market, starting with the opening of a SOC (Security Operation Center) at its headquarters in Madrid.

In February 2016, Prosegur entered the SBV Services, a South African cash-in-transit company, buying the company's 33% for €18.8m to enter the African continent, the only one it has not previously been active in.

According to Prosegur, SBV Services' experience and knowledge of the South African market make it the "ideal" partner to enter this market.

SBV Services, based in South Africa and with a presence in Nigeria, Namibia and Lesotho, has 44 branches, a fleet of more than 740 armoured vehicles and a workforce of some 6,400 employees,

In January of this year Prosegur bought the international transport company for valuable and vulnerable goods, MIV Gestión.

This purchase allows Prosegur to extend its international network thanks to the contacts with which MIV already operates, as well as to incorporate all the know-how and experience of the acquired company, which has professionals with detailed knowledge of the jewellery sector and other valuable cargoes.

From its offices in Madrid and Barcelona, MIV provides services to customers in Spain, Portugal and Andorra, mainly door-to-door service for end customers in export and destination-to-door airport services for companies.

Its customers include other security companies, jewellers and bank card providers, while the type of cargo it transports includes precious metals (gold and silver), diamonds, fine watches and jewellery, as well as foreign banknotes and coins, bank cards, electronic components and confidential documents.

If you are thinking of selling your company or growing through acquisitions, contact us. Abra-Invest has a team of experts in acquisition processes at your disposal. Fill out the contact form or call us at + 34 946424142

NVent and its 2 new acquisitions