In the first half of November, new funds for the technology sector were announced and will come to the market in early 2017. 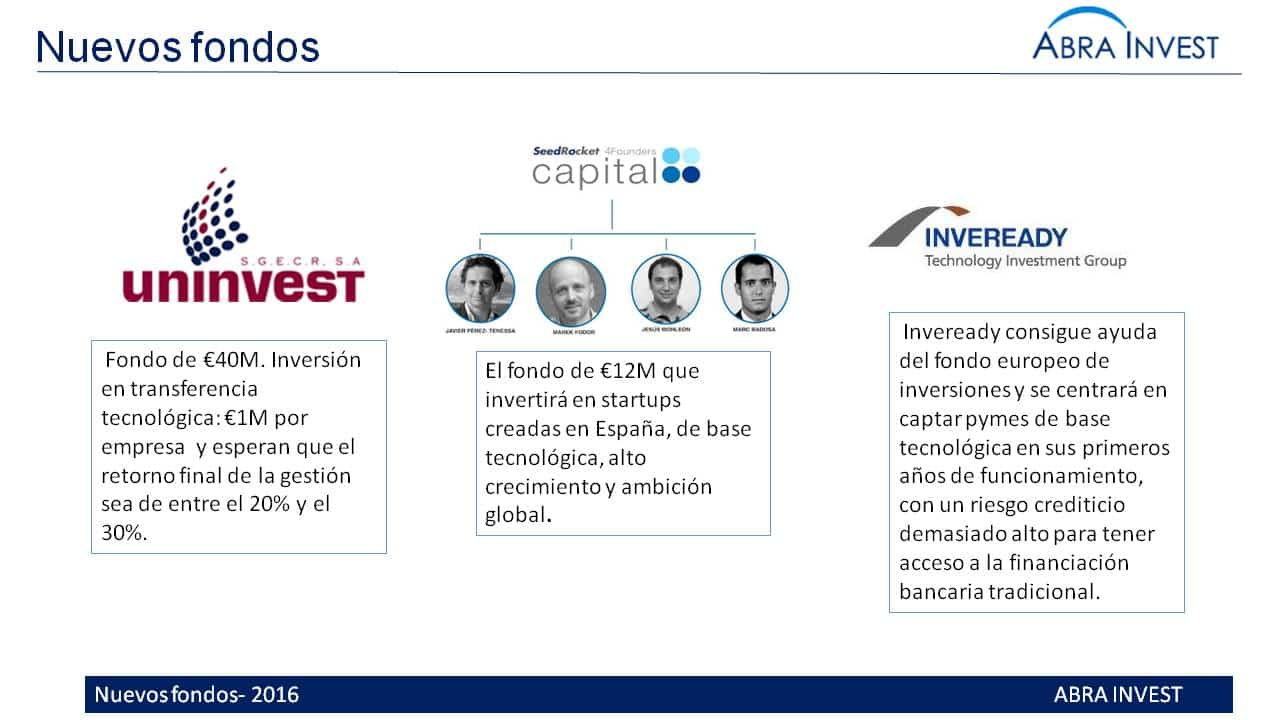 Uninvest is a  a private venture capital firm specialising in technology transfer that already had an €18.5m fund and has now announced that it will launch its second fund for 2017, but it is €40m.

The fund manager only invests in research and knowledge-based business projects, i.e. projects based on applied science carried out in Spanish universities and research centres.

"With the new fund we intend to make between 15 and 20 investments", explained one of the managers of Uninvest, Martín Rivas, at a press conference. He stressed that this new project seeks to "accompany the company for seven or eight years" and to be present when they need help or financing to grow.

The optimal inflows, according to Uninvest in the new fund would be around €1M and they expect the final return of the management to be between 20% and 30%.Currently, Uninvest has five companies in its portfolio although in the process of divestment.

This fund, aimed at family offices and professional investors who are unfamiliar with the structure and workings of technology companies but appreciate the value and rewards that can be derived from startups, will be launched in January 2017.

The fund will invest in technology-based, high-growth and globally ambitious startups created in Spain.

Although the initial fund stood at around €10 million, it was increased to €12 million and is open to new investments. Another differentiating feature of this fund is that 'investors can invest in a company in more than one round'. In other words, companies with positive results will be eligible for more than one round of funding.

SMEs that access this financing will have loans with advantageous conditions over the next two years. Inveready, will focus on attracting technology-based SMEs in their first years of operation, which are too high a credit risk to have access to traditional bank financing.

For this fund, Inveready has been supported by the European Fund for Strategic Investments (EFSI), the heart of the investment plan for Europe.

"In addition, the EU wants to launch a venture capital fund of around €1.6 billion to financially support start-ups in the region at all stages of their life. Of this amount, 25% (€400M) will be provided directly by the EU institutions themselves. The remaining three quarters will come from private investors. We are currently looking for fund managers who are potentially interested in participating and/or managing this fund," says Diego Gutiérrez of Abra-Invest.

Tecnocom's turnover has grown by 5% so far this year and its shares have appreciated by 197%.
If you are looking for investors, o you want to buy or selling a companyPlease contact us on +34 946424142 or fill in the contact form.