Virtual and augmented reality, a market with potential that received $1.8B in 2016

In 2016, virtual reality and augmented reality companies attracted $$1.8B from investors. If in 2015 we saw the beginning of a wave of investment rounds in the sector, doubling the number of operations, in 2016 the number of operations has continued to grow, reaching 171 rounds, and the average amount of the rounds has doubled in 2016. 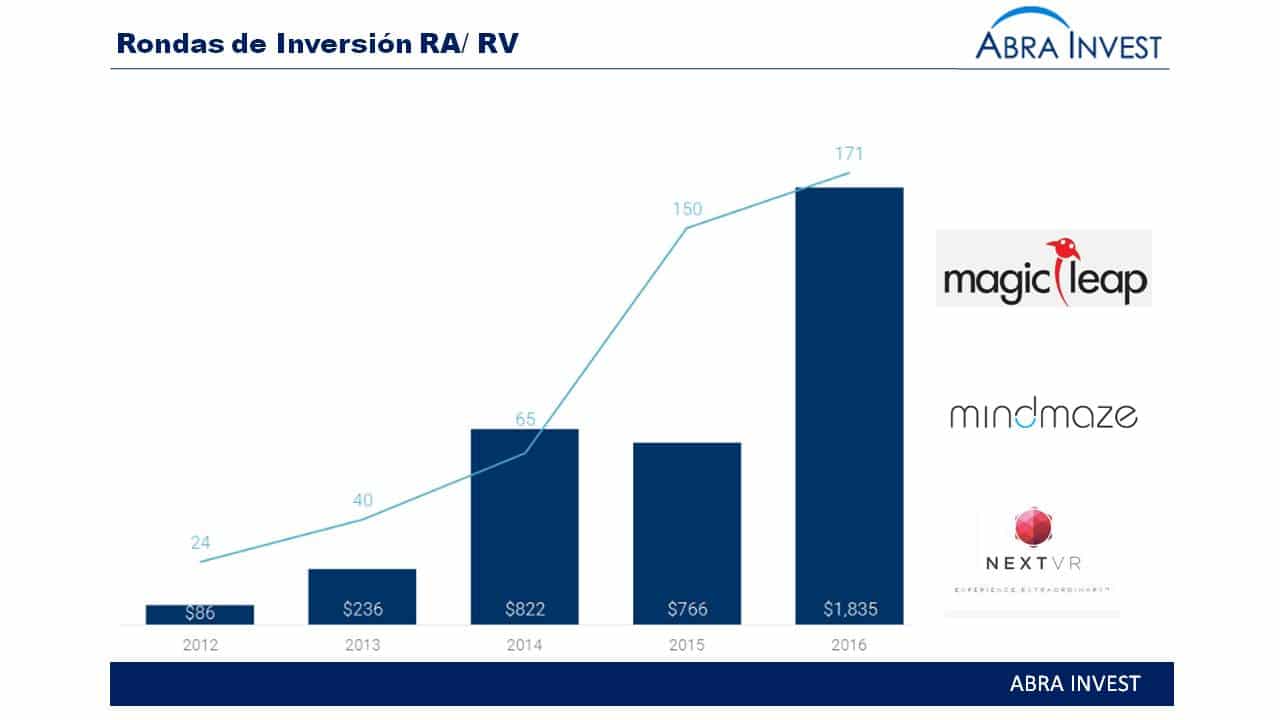 Magic Leap$4,500M, closed in February its third round for $ 793.5M, without yet having any product on the market.

MindMaze, is focused on product development for business use, especially in healthcare and rehabilitation. This European company, based in Switzerland, has received a $100M round. This new capital injection was aimed at developing virtual reality hardware and software to provide clinical treatments for stroke victims.

NextVR, has been another company that has attracted the support of investors. This Californian company has closed its second round for $80M. Among the investors, in addition to those who had already participated in the company in 2015, we find a group of Chinese investors. NextVR, which focuses on live virtual reality broadcasts. The company's latest virtual reality broadcasts include live concerts, sporting events such as the Home Run Derby and the US Open golf tournament.

In addition to the aforementioned Psious, In 2016 we have also detected investment rounds in Spanish companies in the field of virtual reality and augmented reality.

Wooptix is a pioneer in our country in the use of 3D technologies that can be applied to any type of camera. This company, which can transform any camera into a 3D camera, is a spin off from the University of La Laguna in Tenerife. In July Wooptix, closed a €3M investment round in which Bullnet Capital and Intel Capital participated as well as Caixa Capital Risc.

Study on virtual reality in the e-health sector

One of the sub-segments in which we have detected that there are beginning to be investment rounds is health. That is why our business unit Logic-finwe have carried out a study on investment in the sector that we would like to share with you.

Some of the companies featured in the study include Vicarious surgicala virtual reality software for invasive surgical procedures, which has received a €3.2M round of funding. AccuveinThe new venipuncture system, which allows the visualisation of veins without contact with the patient, enables fast, safe and successful venipunctures.
If you are looking for investors, you want to buy or selling a company or if you want to get the study of AR and VR in the e-health sector, call +34 946424142 or fill in the contact form.

Ezentis buys Chile's Tecnet to grow in the energy market

Spanish technology companies with the largest rounds in the US in 2017. Red Points receives €10M.