BY : Diego Gutiérrez | October Thu, 2015
According to a report by EY, in the second quarter of the year Spain is at the forefront of M&A deals in energy, with 7 deals worth $3,100M, and of the 5 largest European deals by volume in the quarter, three are Spanish. The largest deal involved Madrileña Red Gas, which was sold by Morgan Stanley to the consortium of companies formed by Gingko, PGGM and EDF. It seems that we are also on the right track this quarter and several deals in the sector have already been announced. 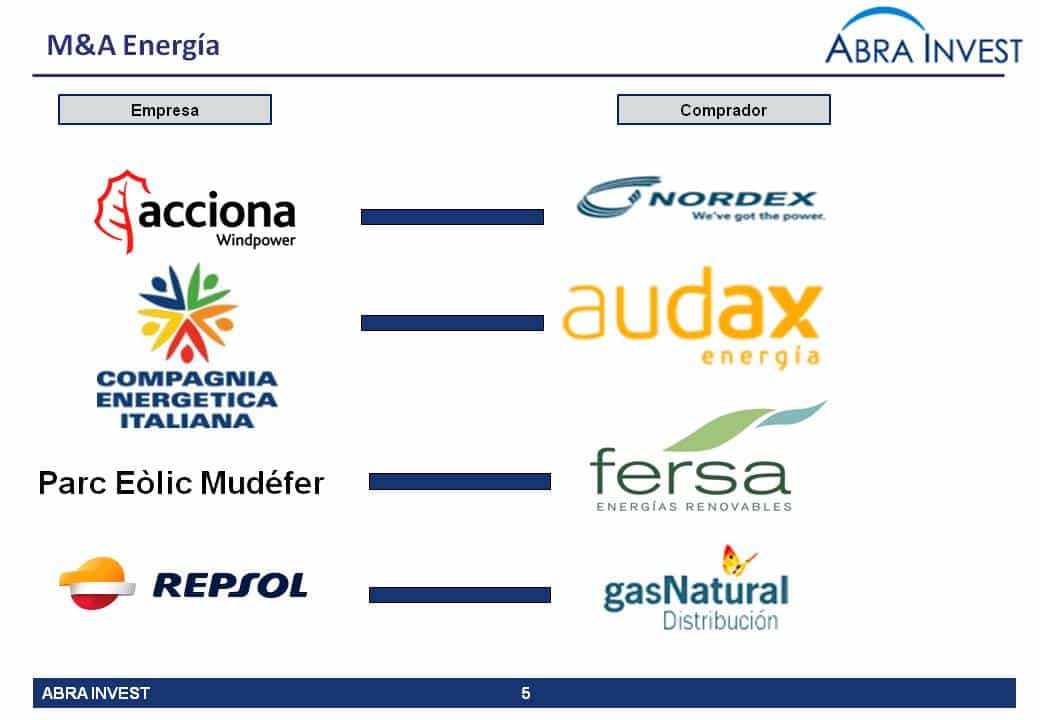 "For the time being, the merger of these two companies gives rise to the world's fifth largest operator in the onshore market with a market share of 8%, which allows it to reduce the current price risk in the market. Abra-Invest.

The transaction is part of Acciona's strategy of opening its businesses to the entry of partners, as already occurred last year with its international renewable energy assets, in which the fund KKR took a 33% stake. The group is currently considering opening its real estate division to an investor.

Audaxthe Barcelona-based electricity trader has bought the Italian company with the aim of strengthening its presence in Italy, where it had already been present since last year when it purchased the company.  the company ofTurin Big Energiawhich had around 2,000 customers and which the Catalan company has doubled in 2015.

"Furthermore, Audax, which is also present in Portugal and Germany, aims to continue expanding internationally with the entry in the short term in three other European Union countries," says Diego Gutiérrez.

Fersa, renewable energy company has bought the remaining 16% of Mudefer for €3.1M.

Mudéfer owns two wind farms in the municipality of Caseres (Tarragona) with a total installed capacity of 57.6 megawatts (MW).

The company explained that this purchase operation is part of the consolidation process of the wind farm portfolio undertaken by the company in order to focus its activity in European countries and, in particular, in its main markets of Spain, France and Poland.

"A few days ago it was announced that Fersa had closed the sale of its subsidiaries in India, precisely in order to reorganise its wind farm portfolio and reduce debt," says Diego Gutierrez.

Repsol has agreed to sell part of its piped gas business to the companies Gas Natural Distribution and Redexis Gas for €651.5m.

This divestment is part of the process of selling non-strategic assets announced by Repsol to finance the purchase of the Canadian oil company Talisman, a transaction valued at 10.4 billion euros, including debt.

If you are looking for public or private financing, contact us. Abra-Invest has a highly experienced team of experts in alternative financing to help you with whatever you need. Call +34 946424142 or fill in the contact form.

Major financing rounds in the energy sector in 2015