BY : Diego Gutiérrez | September Wed, 2015
According to a study conducted by UR Global, in recent years, SMEs and startups in the e-learning services sector have been the profile of companies that have most decided to make the international leap, along with other sectors such as digital marketing. In order to grow internationally, it is necessary to have financing. Below we highlight operations in the e-learning sector that have been carried out in the last quarter. 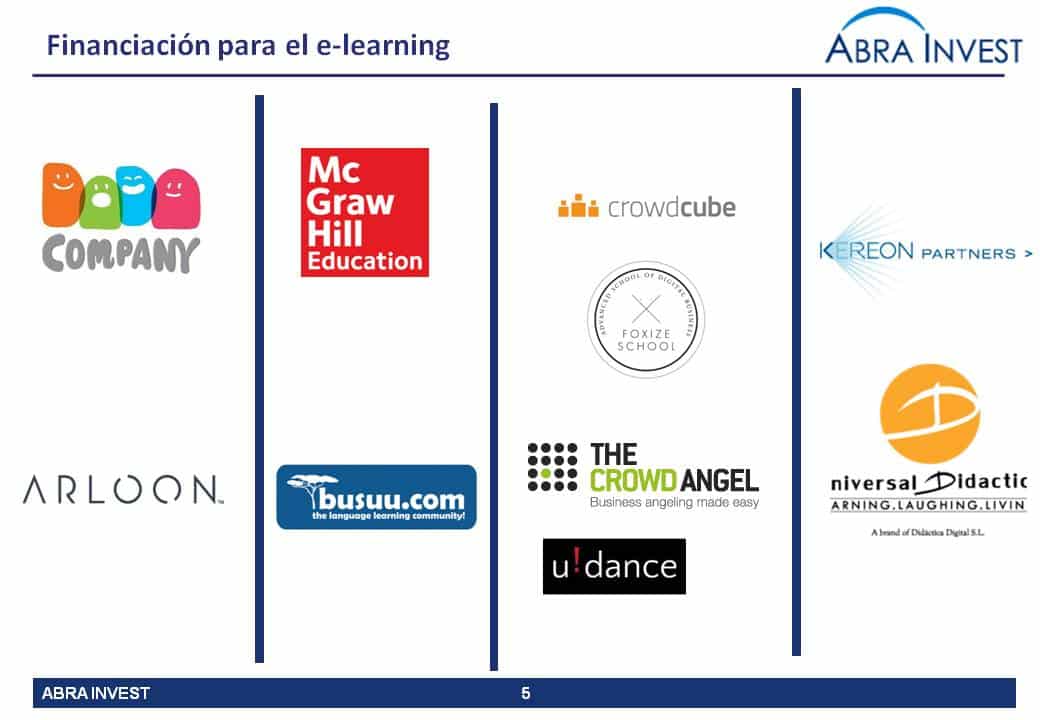 DADA Company is a Spanish company dedicated to the development of children's applications for mobiles, which in its strategy to grow in the adolescent market, has acquired Arloonwhich develops apps that use augmented reality to help children learn while having fun.

McGraw-Hill Education (MHE), the former education division of McGraw-Hill Financial, has bought a minority stake in the company. Busuua language learning startup based on contact with native speakers, which was founded in Madrid in 2008.

Although Bussu was founded in Madrid in 2012, it moved to London and in that same year the fund Profounders Capital led a €4,5M investment round, after this round Busuu has done 4 more rounds. Currently Bussu gives you the possibility to learn 12 different languages.

Crowdfunding is also interested in education: Foxize School and Udance

Foxize School is a business school specialising in digital knowledge and skills for professionals and companies that offers three-hour face-to-face and online courses taught by recognised experts in the sector.

Foxize School has raised €203,600 on Crowdequity's Crowdcube platform. This has been possible thanks to 184 investors, both professional and non-professional, including Optimist Capital.

Foxize School is the first business school to be financed through a crowdfunding investment platform and to allow faculty and students to become shareholders.

Udance, the online dance school has received €150,000 on the crowdfunding platform The Crowd Angel.

The firm wants to grow in Barcelona and Madrid and make the international leap to London, New York and Berlin by 2016.

The Basque group Kereon Partners has invested €600,000 in Digital Didactics,  taking the 40% from the capital.

Didáctica Digital was created in 2009 by Villalón and the Zanuy family as a platform for the production and marketing of online educational material for primary school subjects for more than 200 schools.

After turning the business model around, the company no longer targets schools but the end consumer and offers its reading, English and maths reinforcement products to pupils' families.

The company, based in Sant Just Desvern (Baix Llobregat), earned 500,000 euros last year and 250,000 euros in 2013. The forecast is to exceed one million euros this year with the new business model, according to Vidal. The company offers a monthly subscription of around ten euros and to buy the whole product for around 120 euros.

Analysis of investment in the e-learning sector. Lingokids closes a 7.3M$ round

Netex goes public on the MAB: the first Spanish company in the e-learning sector to be listed on the stock exchange.