THE NVIDIA COMPANY AND ITS VALUATION

NVIDIA Corporation is a company that designs, develops and markets graphics processors and related software.

It offers, for the most part, products that provide 3D interactive graphics to the mainstream PC market.

In the following lines we analyse the company, its current situation and its future prospects.

GETTING TO KNOW NVIDIA

NVIDIA was founded in 1993 by Jen-Hsun Huang, a Taiwanese engineering student at Stanford University, together with other colleagues and industry professionals with experience in the microprocessor industry and at LSI, such as Chris Malachowsky and Curtis Priem.

Contrary to appearances, the company's history has not always been one of success - indeed, its first launch of a graphics processing chip in 1995 was a failure.

Despite this, two years later they introduced the first 3D graphics processor that revolutionised the industry, both in speed and quality of processing.

This product benefited from the sector's growth and development. In addition, thanks to the company's highly executed strategy, they were able to achieve their first profit in 1998.

Later, in 1999, coinciding with their IPO, they invented the graphics processing unit, an event that would radically change the graphics industry.

Although more than 70% of NVIDIA's sales are concentrated in Asia, the business is spread across many countries.

Within Asia, Taiwan accounts for about 30% of the company's sales followed by China with about 25%. The United States alone contributes 15% of NVIDIA's sales.

The company is the undisputed leader in graphics processing for video games, which require a lot of computing power to handle the large amount of graphics required by these types of programmes.

Today, it controls more than 70% of the market, with continuous development and innovation, to continue to offer solutions to the increasingly demanding video game industry.

Through this dominant position in the gaming market, it has been able to introduce its products into the artificial intelligence and automotive sectors, in its development of autonomous cars.

As an example, the three largest cloud service providers - Amazon, Microsoft and Google - all use NVIDIA processors.

However, competition in the sector is increasing.

AMD e Intel are major threats to NVIDIA and its recent launches of new processors.

NVIDIA continues to develop and innovate its products in order to remain an industry leader, and is looking for new partners to grow with.

The company has experienced tremendous growth in the last 5 years, recently being included in the top 10 chip manufacturers.

We examine in the following lines the company's financial statements, its future prospects and its current valuation in the stock market. 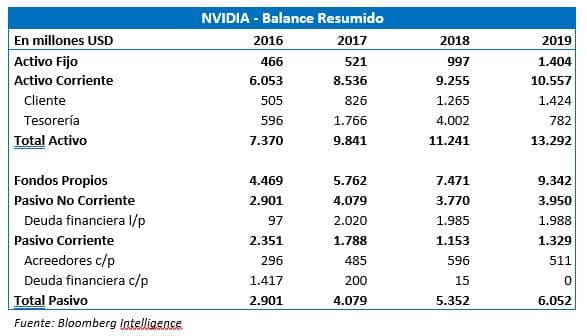 As can be seen, NVIDIA's growth in recent years has been spectacular.

If we take data since 2014, the company's sales have grown by 150% and profit has soared by 555%, largely due to sales of processors and chips for the increasingly complex artificial intelligence, data processing and video games sectors.

In the recent year 2019, sales reached $11,700M, an increase of $2,000M over last year thanks to a 52% increase in sales to the so-called data centres and products intended for desktop computers and smartphones.

This sales growth, coupled with higher margin products, has driven net profit to 1TP2Q4,100M in 2019.

This is reflected in EBITDA, EBIT and ROE, which are very high and even above the industry average.

Although a slowdown is to be expected in the coming years, NVIDIA does not seem to be too adversely affected, given the large increase in previous years.

The balance sheet items do not show any drastic changes deviating from the company's growth in recent years.

However, cash did suffer a significant decline of more than $$3 billion, partly explained by funding requirements through share buybacks and the acquisitions carried out in 2019.

However, the operating cash flow $3,700M in 2019 was higher than that generated in the prior year, evidencing NVIDIA's ability to continue to generate cash from operations.

NVIDIA's multiples are above industry multiples, which seems logical given its dominant market position and recent strong expansion. 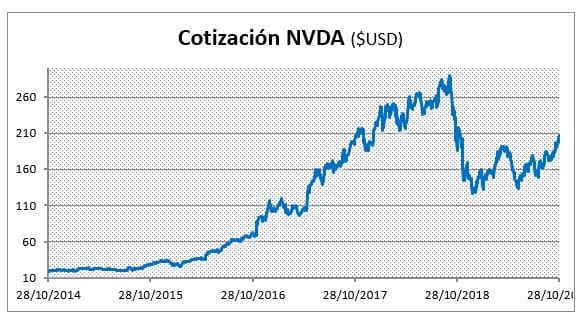 As can be seen in the chart, its share price clearly reflects its development, with a sharp decline at the end of 2018 which can be explained by the large decline in all global stock markets and which is usually seen most severely in the technology sector.

Since then, however, the company has been able to recover and it seems that the markets continue to have confidence in NVIDIA's business model, strategy and future prospects.