The rise of advertising and new technologies is increasing the interest of the public in the investors for this sector. Since 2010, 4 advertising agencies, through their funds, have been involved in 52 investment rounds, totalling $500M.

The main investor in the sector is WPP DigitalWPP's digital investment arm, which has completed 26 deals in the sector since 2010. These include, most notably, the purchase of Blue State Digitaland the investments at Fullscreen , Salesforce Buddy Media y Miaozhen Systems.

Blue State digital is a digital agency specialising in advocacy, membership and fundraising campaigns for non-profit organisations, educational and cultural institutions, political campaigns and corporate brands, which in December 2010 was acquired by WWP.

Fullscreen is Youtube's leading global network for creators and brands, which in June 2013 received one round of $30M, in partnership with The Chernin Group, Comcast Ventures and WPP Digital.

Buddy Media is a software that provides tools for large companies to manage their social media pages on Facebook and Twitter and can measure the effectiveness of social media marketing programmes. In November 2010, it received a $5M round from WPP.

But WPP's investments are not limited to the US market. In April 2013, WPP invested in Miaozhen Systems, China's leading big data digital advertising measurement company.
"This investment continues WPP's strategy of developing its services in fast-growing and important markets and sectors such as Greater China, one of the fastest growing markets for the company, and WPP's third largest market with sales of €1 billion in 2012, including its associates," said Diego Gutierrez.

32% of the deals in the sector took place in New York, which is not surprising as it is the advertising capital of the world. Among the companies that have received funding are Adaptly, social media advertising platform, which in May 2012 received $10.5M of Valhalla Partners, Time Warner Investments y Social Starts.

California and Massachusetts are next with 21% and 13% of deals, respectively. Internationally, China and the UK are the main players, with WPP as the main investor. 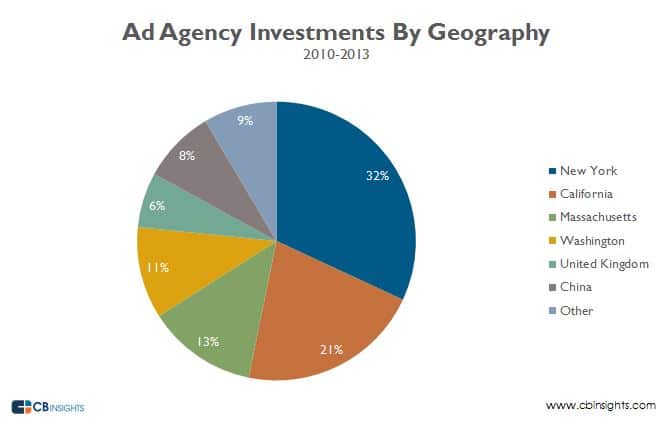 If you want to know more or if you think we can help you, do not hesitate to contact us.

IBM vs Oracle: Who is more innovative?