Inveready has started the year with a strong commitment to biotechnology. A few weeks ago we announced that it had invested in Oncostellae, and recently we have learned that it has invested in two more companies, in Ab-BIOTICS through its debt fund and in Cuantum through its Inveready Biotech II fund. 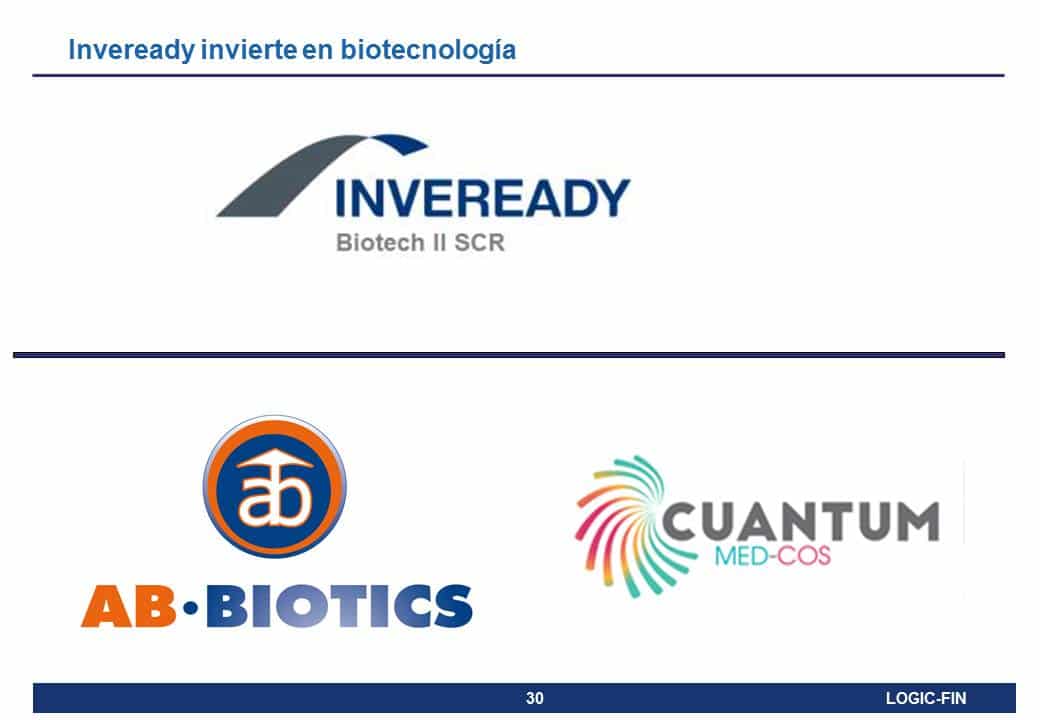 AB-Biotics , a Catalan company listed on the MAB, has received a loan of 600,000 euros from Inveready, through its fund Inveready ventures finance I, a venture capital fund specialising in debt that provides loans that are backed at 50% by the European EFSI fund in the framework of the Innovfin programme to support innovative companies.

This transaction is one of the first to be carried out through this fund, after the agreement signed on 1 February between the European Investment Fund (EIF) and Inveready Venture Finance, to provide 6.6 million in financing over two years to innovative technology companies in Spain, thus supporting the emerging Spanish entrepreneurial ecosystem.

With this loan, which has a repayment period of 18 months, AB-Biotics will finance the company's international growth and accelerate the market launch of different products.

The transaction with the fund provides that Inveready will have a call option on 86,957 shares in the fund. AB-Biotics 2.07 per share. This package represents about 0.91% of the capital.

Inveready has invested through its Inveready Biotech II fund in €1.6M in Cuantum Medical Cosmeticsa biotech company founded in November 2015.

Inveready Innvierte Biotech II, a private equity fund managed by Inveready Technology Investment Group, has invested in Cuantum Medical Cosmetics, a biotech company founded in 2015 with the aim of developing and commercialising cyanoacrylate-based medical adhesive products, which already has a strong structure in Latin America and Asia.

This first round will allow Cuantum to deploy its commercial strategy at two levels: in the Business to Business market, Cuantum will commercialise monomers and cyanoacrylate formulations. In the Business to Consumer market, up to 10 new products will be launched over the next two years in the veterinary, cosmetic and medical adhesives sectors (OTC and Hospital channel).

2016, a good year for biotech according to Ysios Capital and Caixa capital risk funds

In an interview with Josep Lluís Sanfeliu , founding partner of Ysios Capital and José Antonio Mesa is the investment director of Caixa Capital RiscBoth agree that 2015 has been a good year for biotechnology in Spain and that 2016, with large-scale operations already underway, looks good.

Among the investment trends for 2016 we will see opportunities coming out of hospital science and a lot of activity in digital health, as well as continued investment in therapeutic areas such as cancer or cardiovascular, because the medical need is still there.

If you would like to receive funding, please contact us. Abra-Invest has a team of experts in alternative financing with experience in the biotechnology sector.

Investors lose their fear of investing in biotechnology

If you are looking for financing, contact us. Abra-Invest has a team of experts in alternative financing at your disposal. Call + 34 946424142 or fill in the contact form.