From July to August 2019, Baker Tilly International commissioned Acuris Studios to gauged the opinions of 150 dealmakers on global M&A opportunities, trends and challenges.

Respondents were evenly split and based in Asia Pacific, North America and Europe.

All of them, have completed multiple domestic and cross-border M&A transactions in the past five years.

Even amid heightened geopolitical risk and rising protectionism globally, cross-border M&A is set to remain a crucial mainstay of corporates ´s strategies gor growth and development.

These deals, however, may come under greater scrutiny as dealmakers adapt to the headwinds shaping the current market.

The current environment of political and economic uncertainty seems to be having Limited impacto n Corporate and private buyer desires to get deals done.

The trade dispute between the US and China continues to have far-reaching effects throughout the global economy, particulary in the M&A marketplace.

Respondents say the US-China trade dispute will be the main driver of their future adquisitions, moer than many others factors shapping strategies today.

Asia Pacific and North America stand out, as respondents expect M&A activity to accelerate given clear market advantages, promising growth rates and the availability of deals.

Asia´s developing economies clearly offer attractive opportunities for multi-national bussinnesses now looking to step up their growth and to expand into new markets.

Respondents are attracted to North America for its reliable infrastructure, the availability of attractive target opportunities and its political stability and legal certainty.

Nevertheless, dealmakers do have some concerns. 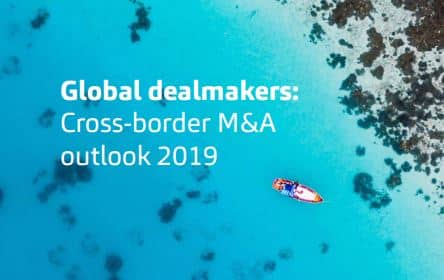 SECTORS IN THE SPOTLIGHT

Technology, media, telecommunications and consumer will be the focus of global M&A as dealmakers look to bolster their digital advantages and tap into new customer groups in developed and emerging markets.

At a sectoral level, more than three-quarters of respondents pick out technology, media and telecoms are likely to be amongst the three most attractive sector for M&A activity.

Devoting more resources to due diligence and choosing the right advisors mta mitigate some og these challenges.

The current market is both challenging and complex, with various factors coming together to create conditions that could see more deals fail than succeed.

On the one hand, while 2019 has seen M&A deal volumes and values slow from the levels recorded in 2018, there is no reason to expect any significant decline in activity over the year ahead.

The vast majority os respondents expect activity to at least be sustained at current levels, including more than half who expect an increase.

There are good reasons for this confidence.

And, on the other hand, the importance of assembling a estrong M&A team, with relevant expertise and experience, cannot be understated.

Securing these these skllis will imprive the deal process at every stage, reducing the risk of pursuing inappropriate deals, or suffering the negative impacts as M&A collapses at a late stage of due diligence.