Most relevant acquisitions in the Food and Beverage sector

The trend of acquisitions of companies in the food and beverage sector has been clearly upward, with more than 5,500 financing rounds worldwide and raising, in total, more than $58.6 billion. Although the number of funding rounds in each of the last years analysed (2017 and 2018) has been similar, in terms of funding raised, 2018 saw a record high in the sector, with $10.6 billion invested in just one year.

This is because the rounds launched in 2018 were much more significant in value than those conducted in the previous year. For example, the company Magnit attracted USD 2.45 billion in equity investment in the same year, and Starbucks received $900 million. 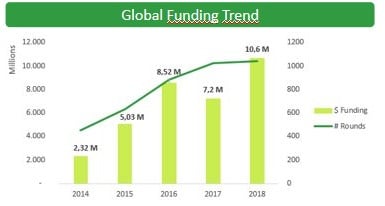 Most active acquirers in the Food & Beverage sector

The most active companies in acquisitions have been large multinationals such as Coca Cola, Unilever and home-delivery companies Bite Squad y Just Eat.

The Coca Cola Company has acquired a total of 13 companies in recent years, including some of great international importance, such as the coffee shop chain Costa CoffeeThe company has also been active in the production of the AdeS brand of juices and soya drinks, and the soft drinks company Tropico.

With the same number of acquisitions is the company Bite Squadwhich has acquired over the past five years the companies FoodNow and DoorStepamong others.

Most relevant acquisitions in the sector

One of the most talked-about deals in the food and beverage sector was the acquisition of Whole Foods by Amazon in June 2017, for a total value of $13.7 billion.

Another major acquisition was that of the US bakery and coffee shop chain Panera Breads by the German conglomerate JAB Holding Company for USD 7.2 billion.

Finally, it is worth mentioning that Patron Spirits was acquired by Bacardi 5.1 billion in January 2018.