Fondico wants venture capital in Spain to gain momentum and has just announced a new call. We are also seeing new funds being raised for new funds, which will invest in a wide range of companies, from industrial technology companies just out of university, to family businesses, to industrial companies with an international vocation. 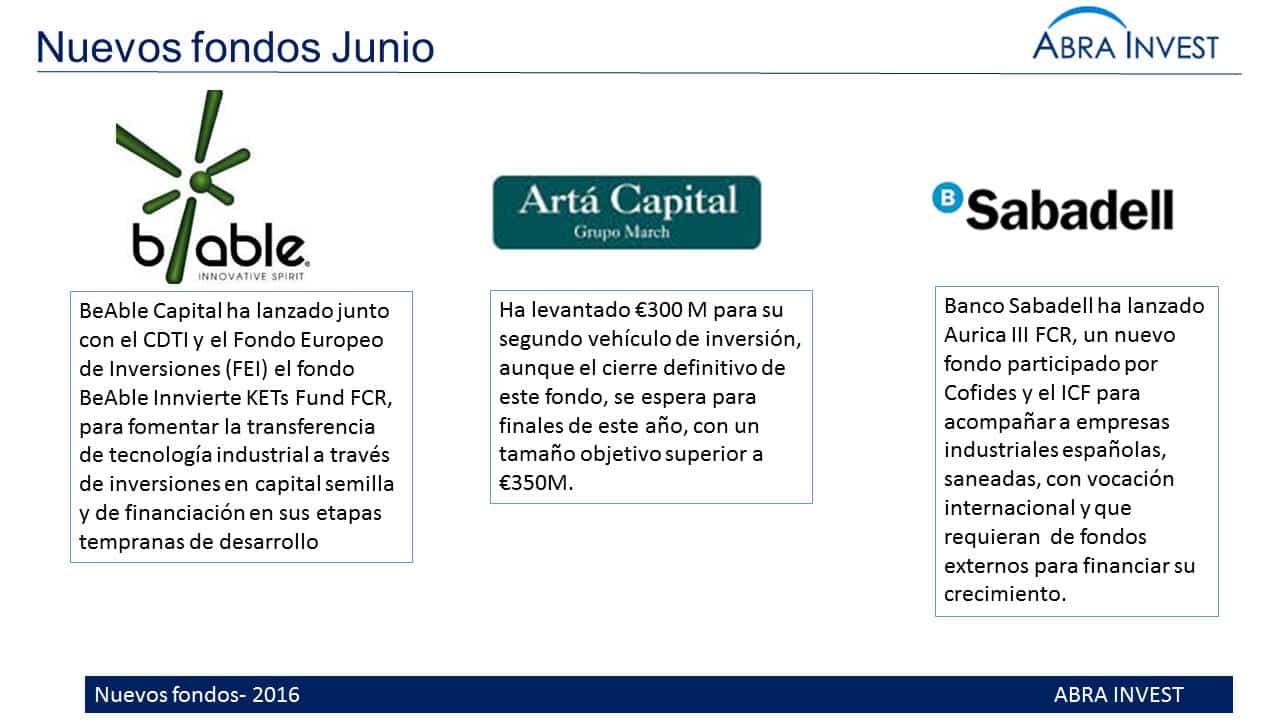 Fondico Global aims to encourage venture capital activity in Spain. Barely a month has passed since the resolution of the last call and it has already announced the launch of the 7th call.

Unlike previous rounds, this time the number of winners will be three per section, they say, and not two as on the three previous occasions when the competition was opened. Apart from this novelty, no major changes are foreseen with respect to past editions, neither in the conditions nor in the evaluation criteria used to designate the winners.

It seems that the three categories that have existed in recent calls will continue: expansion, venture capital and incubation, although the maximum amount that the ICO will be willing to invest will vary.

BeAble Capital has launched together with the CDTI and the European Investment Fund (EIF) the BeAble Innvierte KETs Fund FCR. The fund, which has so far achieved a first closing of €32 million, aims to foster industrial technology transfer through seed and early stage financing.

This fund is the first private and independent technology transfer fund in Spain and the first in Europe specialised in the high-tech industrial sectors identified as strategic by the European Commission (nanotechnology, advanced materials, photonics, micro and nanoelectronics, and industrial biotechnology).

The fund's investments will be arranged in three phases, ranging from €75,000 to €2M. In the first phase, a proof of concept will be made, in which between €75,000 and €100,000 will be invested. If this proof of concept is favourable, a second investment of up to an additional €350,000 will be made, and the third phase will reach €2M. BeAble Capital will support the creation and consolidation processes of Spanish companies with technological capabilities and high growth potential from the research field.

Artá Capital, the March family's private equity manager, has raised €300m for its second investment vehicle, although the fund is expected to close later this year, with a target size of more than €350m.

This fund will focus on medium-sized companies in Spain and Portugal, with a clear family profile, looking for a financial partner to grow the business through acquisitions or investments, as well as to allow the exit of a shareholder.

Banco Sabadell has launched Aurica III FCR, a new fund participated by Cofides and the ICF to support healthy Spanish industrial companies with an international vocation that require external funds to finance their growth.

The fund will invest in 7-8 companies over the next five years, with contributions of between €8M and €30M per deal.

If you are looking for financing, contact us. Abra-invest has a team of experts in alternative financing at your disposal. Call + 34 946424142 or fill in the contact form.

Venture capital in Spain (April 2018): at last the SME as a protagonist