Although there is still a long way to go, the e-health sector in Spain is taking off. The number of Spanish startups in the e-health sector grew by 53% in 2015. The challenge now is for these companies to have the resources to grow. For the time being, companies that connect doctors and patients, a business model that has been around for years in Spain, have already carved out a niche for themselves in the ecosystem. The future of e-health includes telemedicine, real-time patient monitoring and personalised medicine.

The companies that have received investment in the sector are mainly health services marketplaces, for example Salupro y ClinicpOINT.

Salupro, a website that compares prices of health products for dental and veterinary clinics, has closed a €6M funding round with the aim of digitising the typical processes of the sector, investing in online marketing and expanding the business to other countries.

Clinicpoint received a €800,000 round in November this year. The business model of ClinicPoint (formerly known as Medprivé) is based on the arrangement of preferential prices with private doctors and clinics. The firm works with providers such as Grupo IDC-Quirón, Sanitas and Grupo Asisa. This company had previously received 2 rounds of investment, the amount raised amounts to €2M.

Although we did detect rounds in other sub-segments of activity such as Psious which applies virtual reality to the health sector, offering therapies using this technology, or NeurobiaResearch, a software to assess and rehabilitate patients with acquired brain damage and other neurodegenerative diseases, such as Parkinson's, using Microsoft's Kinect controller.

Acquisitions in the sector 2016

This year's acquisitions have been led by large technology companies seeking to offer services for the healthcare sector. In March, the Alcor group, an industrial group specialising in the creation and development of technology companies, acquired a majority stake in eMedica, a company dedicated to the development of medical imaging technology to provide healthcare informatics tools in specialties such as oncology, vascularisation and prosthetics.

Another purchase this year was Iasist's purchase of Iasist by IMS Health. IMS health is an American company, a world leader in information, technology and consulting services for the healthcare sector, which went public in 2014 and has acquired 4 companies in the last year with the aim of providing solutions in different geographical areas.

IASIST is a company with headquarters in Barcelona and offices in Madrid, Lisbon and Chile. Leader in Benchmarking of health services in the countries where it operates. The company's value proposition is to be able to provide healthcare providers and funders with risk adjustments and own predictive values to evaluate and improve their results. 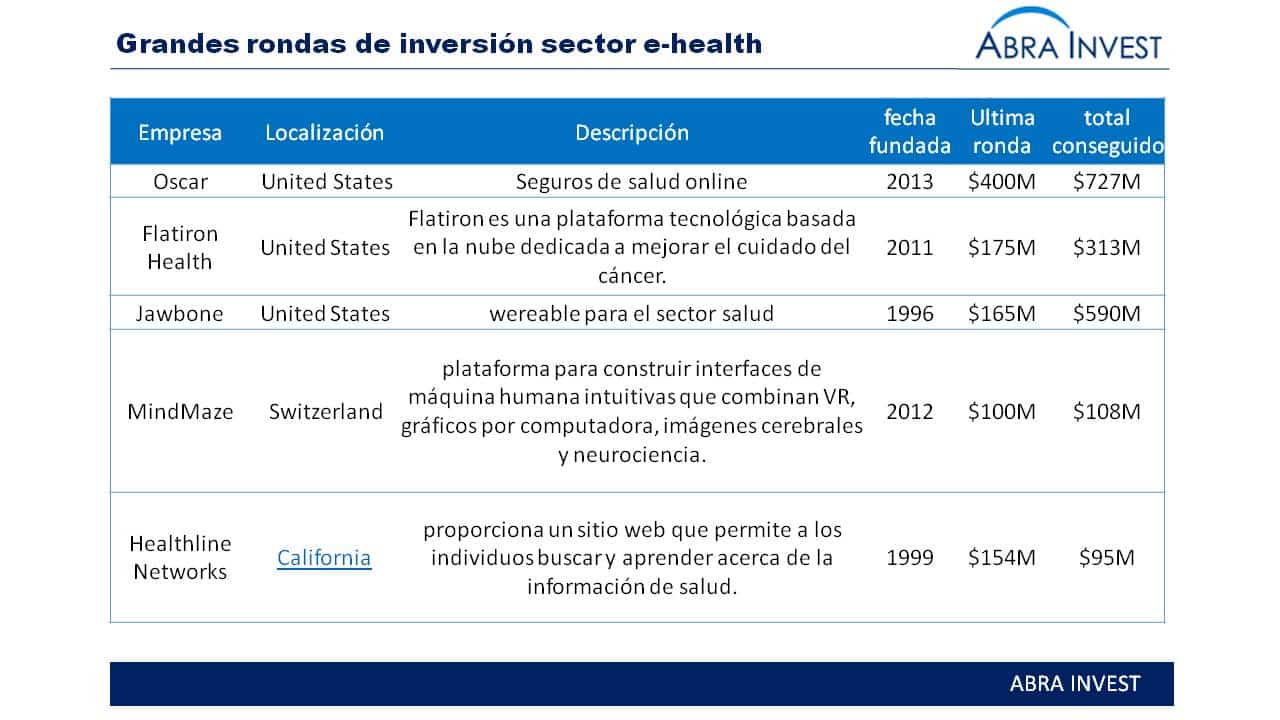 Globally, large deals have been concluded in different business niches. From Logic-fin we have made a study on investment in e-health in 2016 that we want to share with you. You can get it by filling in the contact form or by calling + 34 946424142.